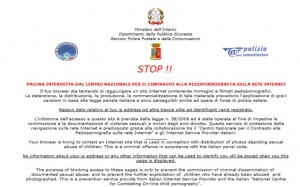 A reissue of the dialer in “salsa child pornography”, or programs installed without the user that redirect them to foreign telecommunication connections and pay that marked the early years of implementation of the Internet – to be understood that it was based Navigation on dial-up and adsl-seems to have been the basis of a police post called “Venice Carnival”.
According to the press in fact a criminal organization based in the countries of Eastern Europe had created a simple but very effective way to find clients on the Internet by installing involuntary over a thousand sites a software that redirects users to another site, where there were pictures and videos of child pornography. http://www.julienews.it/notizia/cyber-scienza-e-gossip/pedofilia-on-line-la-polizia-postale-pulisce-centinaia-di-siti/63016_cyber-scienza-e-gossip_5_1.html
The system would be based on the sending of spam emails.
The story leads to several thoughts:
The first and most obvious observation is that you do not understand how in a highly interconnected and controlled by computer and easy to find among other things required by law, under the rules of the italian  privacy code that has the obligation to adopt security measures such as today’s site managers were completely unaware of what was happening, as if the story had been directed towards computer “zombies” left abandoned maybe an American university.
As is well known, the use of outdated server by criminal organizations, is one of the preferred tools for committing crimes on the Internet hoping to “get away”.
The second point concerns the use of filtering child pornography sites required by italian  law 38/2006 and subsequent amendments and additions, which included a filtering system operated by the IP provider on the recommendation of the National Center for tackling child pornography created at Ministry of the Interior, to avoid Italian users access to such sites.
Since the filtering system is updated daily by the National Center and sent to the provider on the same day it is natural to wonder why, once regarded as established paedopornography the nature of the site in question, it has just stuck to the page content paedopornography source, such as rule is, instead of allowing access for individual users to the page with the risk of facing a situation difficult to resolve the possibility of legislation such as the one who was taken to a page without knowing anything, since apparently found that to be ignorant were both operators of infected servers and users who were redirected from the page.
All this of course if the press information, which appear, however, very confusing from the point of view of law is correct.
A last aspect appears to be extremely interesting in the story told by the press, the identification of users who have had access to the page would take place through the registration of IP data, permitted (and even) required by the legislation on the retention of traffic data by some service providers available to the police and the judiciary.
However the page filtered by ISPs on the orders of the National Centre for the fight against child pornography that appears to those who go on child porn sites presumptively (by chance or less is an assessment which must of course be made by the court) and that has been reported (even if improperly in the incident that gave rise to “Venice Carnival”) by the press http://tg24.sky.it/tg24/cronaca/2011/01/08/pedofilia_pedopornografia_black_list_polizia_postale_maurizio_ciucci
_adescamento_on_line.html appears, however, the message “No data on your IP address to help identify you or any other track will be recorded. ”

One wonders at this point if the data is indeed what happens in those facts as narrated by the press in recent days.